Theory Why White American/Canadian SMV is Highest in Japan

Japan has been mogged into oblivion by Americans for the past 150 years.

1. Forced to open trade by American gunboats
2. Forced to modernize
3. Tried to colonize/dominate neighbors but European powers checked them
4. Get btfo in WW2
5. Get run by a white military dictator for a few years afterwards (pic related)

This widely publicized photo of their manlet god emperor getting mogged into oblivion shook Japan to it's core. From that point on they have been vassals to America and have developed an inferiority complex. 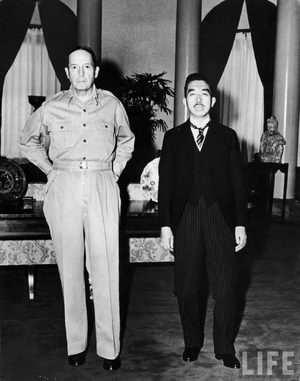 From this point on Japanese women have been born and raised in a domestic and global media environment in which their history and culture and politics is defined by the fact that all of their men and society got mogged by Americans.

Canadian SMV is also high in Japan because all Japanese school children (especially girls) read Anne of Green Gables which is a fantasy depiction of Canadian life. One of the most popular anime's in Japanese history is an adaptation of it. This carries over into things like them fetishizing redheads and white people in general.

shit age demographic tho no young population
B

More for me, I will go there and slay Japanese cakes
You must log in or register to reply here.

Advice Is japan really sexless? and why? [answers inside]

Theory Where most posters are from = hardest difficulty

How is dating in japan for a normie westerner? [results inside]